Like many American cities, Lynchburg, Virginia, experienced the hollowing out of its core city and downtown as residents moved to the suburbs in the last half of the 20th century. And, like many cities, Lynchburg took positive steps to reverse the trend, with a revitalization effort that continues today. In the early 2000s, the city committed to investing $1 million per year for 20 years to beautify downtown and return this historic city to its roots. The Downtown Lynchburg Virginia Retaining Walls Bluffwalk Revitalization Project includes a riverfront renewal, urban trails, public spaces, interpretive facilities and street upgrades.

Located along the James River in the foothills of the Blue Ridge Mountains in central Virginia, Lynchburg is a pre-Civil War burg of about 82,000 residents in a metropolitan area of about 260,000. One of the central components of Lynchburg’s downtown revitalization, the Lower Bluffwalk runs along the James River flanked by a high bank. The Bluffwalk connects the restaurants, residences and retail outlets along a four-block stretch of the that starts at Jefferson Street and ends at the historic Craddock Terry Hotel and Event Center on Commerce Street. 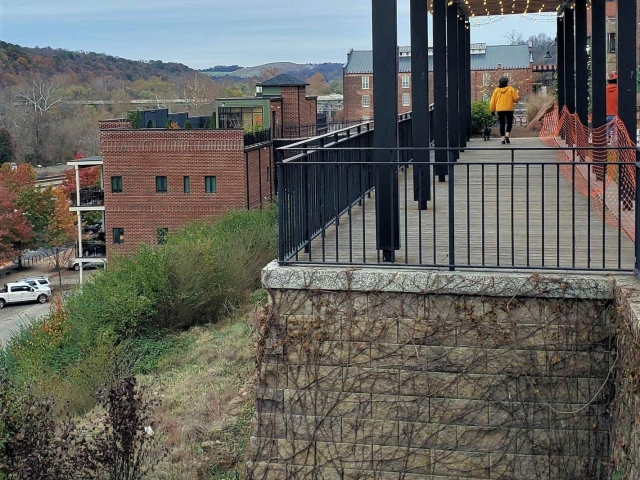 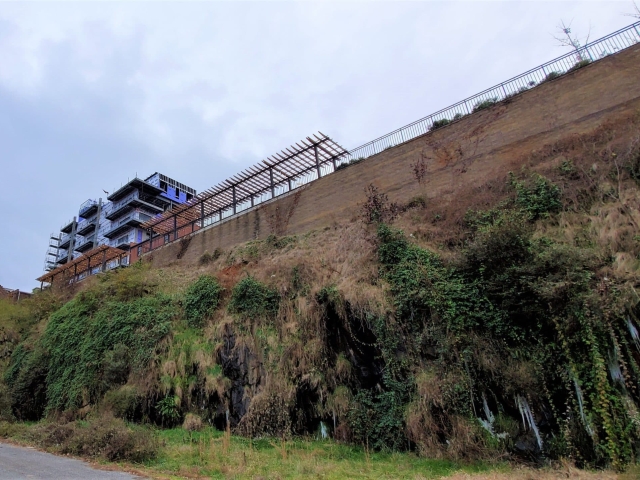 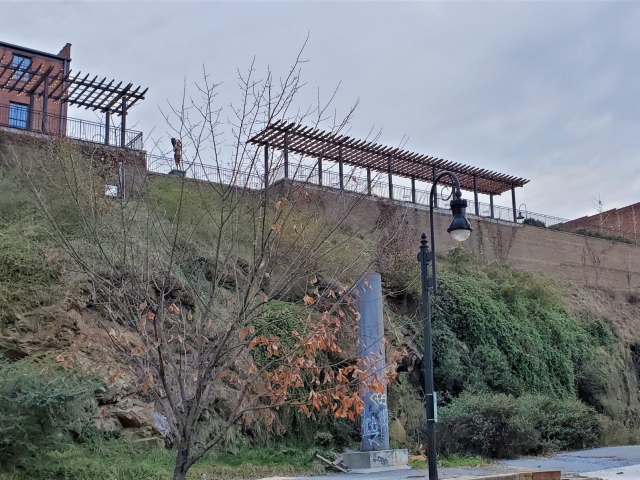 Below the bank, there’s a park with a water feature and a public space for concerts and community activities. Above, there’s a 10-foot wide path with scenic overlooks of the James River and the Blue Ridge Mountains. Running along two-thirds of the Lower Bluffwalk, anchoring the landscape, is a CornerStone retaining wall that helped make the Bluffwalk possible.

The retaining wall at the top of the bluff needed to be strong, long-lasting and great looking.

“In working with the architect, his vision was for something that was natural stone-looking to tie in with the existing natural materials that were already downtown,” Brockwell said. “The CornerStone wall was a nice go-between.”

Cornerstone blocks provided the natural stone look the architect wanted, but with the strength and reliability of a commercial concrete wall. The wall covers about 4,500 square feet, Brockwell said, and is approximately 20 ft. high at its apex. 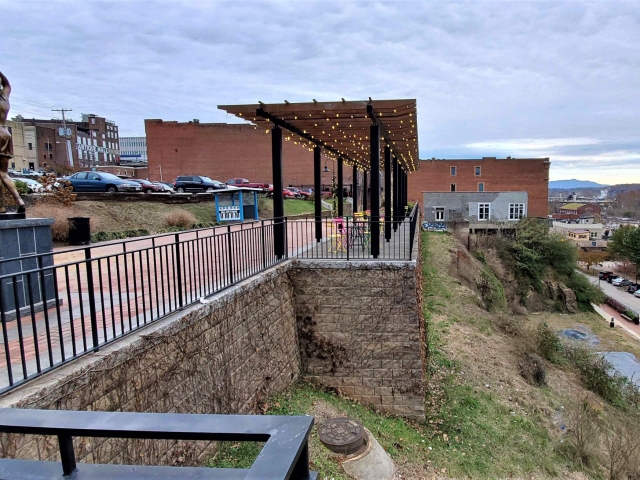 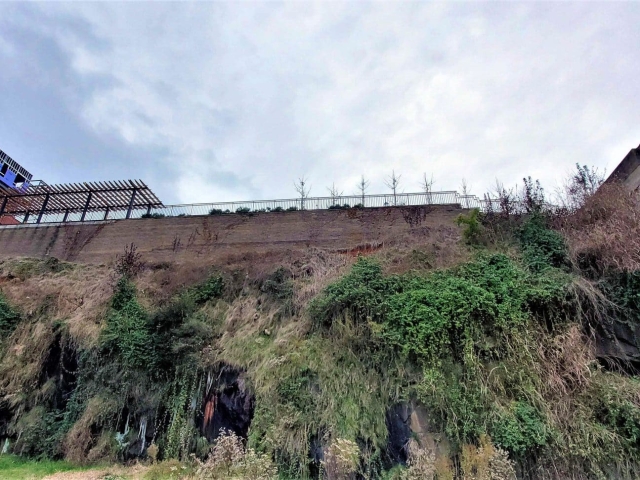 The adaptability of the CornerStone 100 retaining wall system proved to be a key to its selection. Brockwell said the design of the CornerStone block, “allowed us to tie into some existing poured-in-place concrete. We were able to do some custom capping in order to get some railings tied in, so the versatility played a pretty important part.”

That’s not the only place where the design behind CornerStone’s products came into play in Lynchburg. The company’s StoneLedge system, a double-sided tapered block that comes in three sizes, helped solve a design issue and saved money for the city. StoneLedge, which is designed to have the finished look of quarried stone, offers a wide range of possibilities for landscape architects – everything from free-standing walls to retaining walls to fire pits. In Lynchburg’s case, it ended up being used as a veneer.

“The original plan called for the contractor to remove an existing poured-in-place wall that worked as a retaining wall for the parking lot above it,” Brockwell said. “The design called for a StoneLedge wall to replace the poured-in-place wall and support a new parking lot and pedestrian bridge. The contractor wanted to eliminate this part of the project because they were going to have to remove about 50 percent of the parking lot to excavate for the geogrid.”

So instead of removing the wall and destroying the parking lot, the design team came up with a new plan. “We determined that the existing poured-in-place wall could stay,” Brockwell said. “We worked with the contractor to use StoneLedge blocks as a veneer, attaching it to the wall with masonry anchors.”

The contractor used a two-piece 7-inch triangle tie to connect the StoneLedge units to the face of the existing wall, essentially creating a StoneLedge wall in front of the wall. It worked beautifully.

“We achieved the look the city wanted and saved the project time and money.” – Chet Brockwell,  Boxley Hardscapes

Brent Gleason, Boxley vice president, agrees that the versatility of Cornerstone’s products makes it attractive to contractors. Boxley is a large vertically integrated company, with five quarries, four ready-mix plants, a block plant, two sales yards and three asphalt plants. The company sells anything related to masonry and hardscape, he said. Cornerstone remains a popular part of Boxley’s diverse lineup because of the simple, elegant design and modularity that is engineered into its products. Those design concepts come from company founder Vern Dueck, who spent two decades as a contractor and installer before launching Cornerstone.

“You can tell a contractor designed this wall product,” Gleason said. “It’s very friendly to the contractor and it’s also very friendly to the manufacturer. We have used other retaining wall products before that were a lot more difficult to manufacture, so Cornerstone is good from a production standpoint. Contractors really love the ease of installation, particularly with the StoneLedge system,” he added.

The Lynchburg Virginia Retaining Walls Bluff Walks Downtown Revitalization Project, which started with a relatively modest $1 million per year long-term investment from the city has paid off, both Gleason and Brockwell believe.

“It has really changed, particularly in the last five to 10 years,” Gleason said. “The revitalization project has done a lot, bringing in restaurants, condos. Twenty years ago, not that many people lived in the downtown area, so it’s been attracting a lot more people, younger people, and renovating a lot of older buildings as well, repurposing as condos and office buildings.” – Brent Gleason, Vice President, Boxley Hardscapes

The project has brought more than $110 million in private investment, with business activity increasing by 205 percent from 2004 to 2014. Hundreds of condo units have been added, with more under construction. When the city completes a major modernization of the water, sewer, stormwater and underground electrical infrastructure in the area in late 2021, downtown Lynchburg will be even more accessible and attractive to businesses and potential new residents.

“The one big thing is that people are moving downtown now,” Brockwell said. “It was a long time coming. The city itself kind of help jumpstart it, but now there’s a ton of private money coming in. It’s all private money now. That’s the biggest change.”

With the hardscape in place and the underground improvements ongoing, Lynchburg’s Downtown Revitalization Project is bringing a modern, energetic feel to this historic antebellum city.

Interested in Getting a Quote for Materials or Blocks?